I've always said that my best model is whatever I'm building next. Each previous model is a learning experience that should govern my next project, therefore, my latest creation should always be the peak of my artistic vision.

This week's Sprue Cutters Union assignment requires that I write about my favorite model that I've ever assembled. Considering it does not limit me to a kit, but rather any project including dioramas, I initially expected some difficulty in deciding. However, when I sat down to write this, the answer was clear no matter what model I thought about.

Just because my latest model should always be my best one, it doesn't mean it has to be my favorite. That being said, though I was quite pleased with how the Revell Chevy Pickup vignette turned out, it is not my favorite creation. No, I have to think back several years to about September of 2010.
It was at this time that my father and I were exploring the old Naval Air Station Museum in Wildwood, New Jersey. Adjacent to the parking lot is a small airfield, used by small privately owned aircraft. The worn tarmac, surrounded by chain link fence, was lined with a bunch of faded and rather ugly looking aircraft, the likes of which I had never seen before.
They were painted in a camouflage pattern similar to the SEA scheme of the Vietnam era but wasn't an exact match for it. There were no markings clearly indicating a national origin, especially that of the United States. Our curiosity got the better of us, so we asked a friendly museum staff member if they could enlighten us as to what they were... 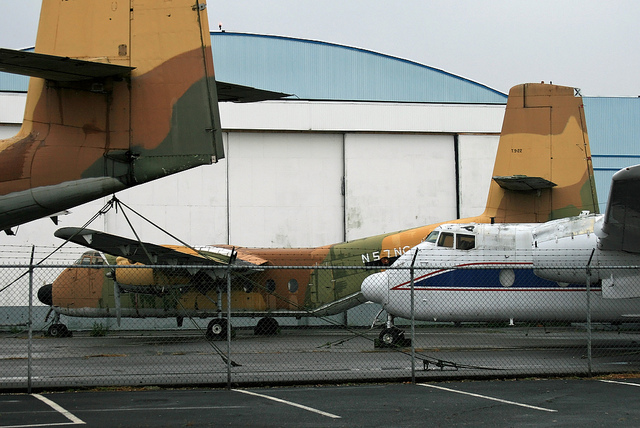 We were told they were de Havilland DHC-4 Caribou. It is an ugly plane, born out of the late 1950's in Canada. The U.S. Army purchased a bunch of these homely looking planes and designated them CV-2 until they were turned over to the Air Force in 1967 when they became the C-7.
Apparently, the aircraft seen above were later sold to the Spanish Air Force, which explains the similar paint scheme, after which they were purchased by a private commercial company and brought back to the States.
Now then, I have been known to surprise my father with a built model kit on Christmas and thought one of these monsters would make an interesting piece for his collection as well as a good memory of one of our days together.

It didn't take long before I found the Hobbycraft 1/72 DHC Caribou online and ordered it immediately. 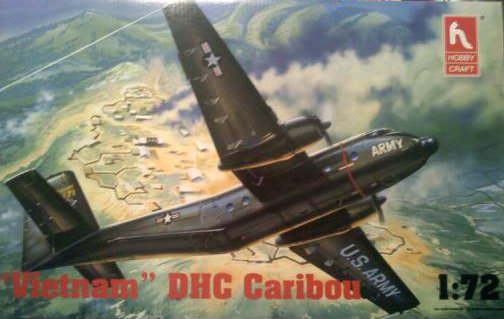 During the few months prior to Christmas, it is customary for my father to attempt to guess what kit I was building for him. Makes for a bit of fun, and that year I was certain I had stumped him. However, my father is wise and insightful, and after a round or two of "20 Questions" he guessed it.
So, that Christmas, my father was the proud owner of a little Caribou... 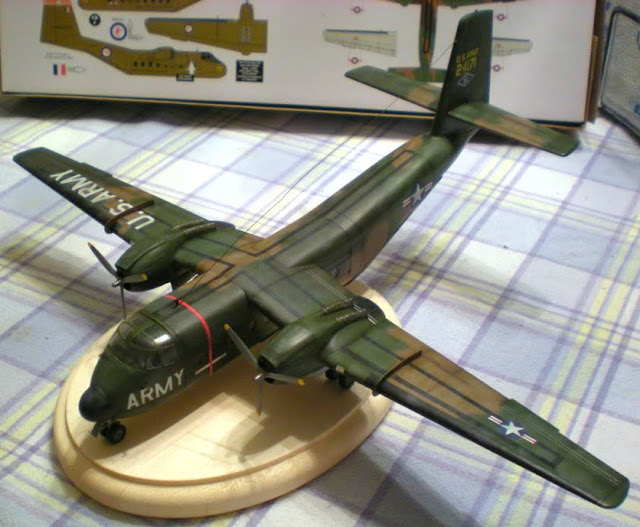 That is the original photo. You can see I was working on my kitchen table even back then. I've since removed the table cloth...
Now then, I'm well aware that the scheme is incorrect as I don't believe the SEA scheme was applied to Army aircraft. But, when it comes to modeling, if it looks cool to me, then that is what I do. The SEA scheme looks far more eye catching than over all olive green. Really, its no contest.
Aside from that, the model was great. There were no issues in construction that I can recall.

Why is it my favorite? Certainly there is nothing flashy about it. It was my best at the time, yes, and really isn't too bad compared to what I do now. But this build holds a special place in my heart because of the story behind it. It reminds me of a day out with my father where we discovered an interesting aircraft. It wasn't just another build, but one with a bit of meaning and sort of an inside joke between myself and dad. How can that not be enjoyable?
So, though I've done better since, I'd have to say this one takes the number one spot on my list of favorite models. Will another one dethrone it? Its possible. I can only hope that my father and I will share some more interesting discoveries together that can be commemorated in scale. Maybe then, we'll see.
Thanks for reading!

The DogsChuffers Scale Model Workshop - Craig looks back at his Opel Blitz diorama!
Yet Another Plastic Modeller - Jeroen couldn't pick just one, so he shows us 3!
Kermit's Workbench - Rich shows us a great looking He-111, worthy of being his favorite!
Doogs' Models - Matt built a beautiful Spitfire!
Eternal Wargamer - Though not quite finished, the Shadowsword is Frank's favorite!
A Scale Canadian - Its hard to see, but Jim loves his little Hurricane!