More to Me Than Modeling (but not much)

Your weekly dose of pop culture!

I know you all love me for my beautiful models, but I wanted you to realize that there is so much more to me than the mass of plastic and glue that I hide behind. This is another reason why I like the League of Extraordinary Bloggers - I'm not all styrene and putty, I have substance!

This week's League assignment is very broad, and wants to know When I was a kid, my favorite ______ was ______. Well, shoot, that's easy! Clearly, my favorite hobby was modeling!

Just kidding. Aside from modeling I have other passions. Namely, my family, but when I've got some free time, there are other things I enjoy doing. I play hockey, all kinds of hockey, I'd even play field hockey if I didn't have to wear the skirt...I play bass, not well mind you, but I do play it. I enjoy running, and taking the bike for a spin. See, you all probably thought I was an over weight, lonely guy, sitting alone in his basement blogging about little plastic models all day. You're wrong!

Instead, when I'm not modeling, I'm a fairly in shape, family guy, sitting alone on his couch playing video games all night...

Though video games don't take up as much time as they used to, I had developed quite a passion for Call of Duty, having owned every title since its inception (or as I like to think, before it was cool). So, with this assignment, the League got me thinking about gaming, and what I used to play as a kid. I wonder if any one has heard of this game but...


When I was a kid, my favorite video game was U.N. Squadron! 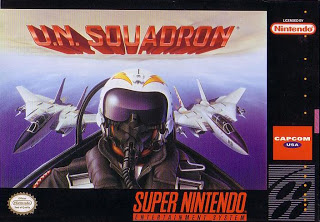 Yes, good times. This side-scrolling shooter was originally released in 1989 and captured my heart, being the little aviation enthusiast that I was.
You basically play as a mercenary pilot, taking on dangerous missions in an attempt to earn your freedom. In doing so, you get to choose from a multitude of aircraft and weaponry to fly around, kill people, and break their stuff. A lot of stuff. 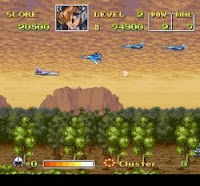 The sounds were great, and the action was fantastic and straightforward. Of course, the game gets harder as you go, with streams of enemy air and ground targets filling the screen with little pixelated missiles and balls of fire to ruin your day. And I generally got a healthy dose of ruined day. I never said I was good at the game, just that it was my favorite... 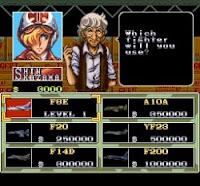 But with the upgrades that were available for purchase prior to each level beginning, it gave me a fighting chance to defeat the bad guys and win the day. I don't recall ever winning the day that often, in fact, I don't think I ever beat the game but thoroughly enjoyed the attempt. This was back when games were difficult, and you gained much satisfaction from defeating the boss at the end of each level.

Never the less, it gave me an opportunity to pretend I was a talented fighter jockey, saving the world from the evil forces of Project 4...whoever they were. It was a great challenge that lead to hours of enjoyment in a well spent youth.

Thank you, League, for conjuring up such fond memories!
With the fall of 2013 approaching, my new favorite video may just be....

Now then, back to the workbench, I've got modeling to do...

Some of you may be wondering what this is all about. Every Monday, an assignment from Cool and Collected is given to participants in the League of Extraordinary Bloggers to write about a given topic for that week. This is my response. Once complete, we post our work, and share the work of others.I use this to bridge the gap between modelers and collectors, who are in most cases one and the same. It is a fun way to get my work out there, and to read the creative stylings of other bloggers.If you enjoyed this article, then you should check out some others like it...