Your weekly dose of pop culture and modeling!

Being an extraordinary blogger certainly has its perks. Thanks to this blog, my kids will have a secure future and an education, and I'll be able to retire comfortably in twenty years or so. I'll buy a sweet house, some where along the coast of Maine, and my wife and I will enjoy lobster dinners by the fireplace wondering where we would be if I hadn't started this blog so many years ago......

Yeah, who am I kidding, right? My work here is supported by my own blood, sweat, and tears (mostly tears), and the occasional encouraging comment from a loyal reader, but still I carry on simply for its enjoyment. But to be truthful, yes, being an extraordinary blogger does have its advantages in that, for today at least, I can pretend to be as rich as I want to be and blow money on senseless items like they're going out of style (in this case, they did go out of style a long time ago). So, lets make believe that I have very deep pockets and display cases that need some filling with some classic merchandise!


This week's assignment is to go on a shopping spree at Hake's Americana and Collectibles to make my place a little more awesome. If you haven't been to Hake's, I encourage you to do so. It is a shop for quality collectibles that has been around since 1967. They sell or auction off a lot of wonderful merchandise, so much so that if I was truly rich and famous I would give them lots of my hard earned money. Thankfully, I can pretend for this assignment.
Lets see, oh what do we have here?

Its a Tru-Flite model airplane kit made by General Mills, the maker of Wheaties! In 1944 the people who brought us the "breakfast of champions" were producing these models by the thousands to give to wounded servicemen while they recovered. These planes flew so well that championships were held across the nation with awards for best appearance, best maneuverability, and longest flight time. So it is true, Wheaties is the breakfast of champions! I'd pick this kit up for $200, no problem!
But wait, what is this? 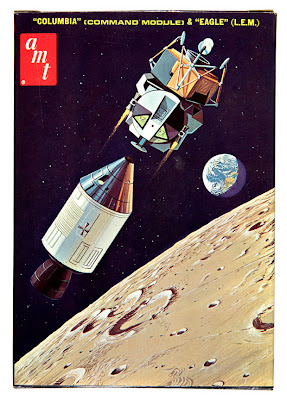 Holy crap, its a vintage AMT kit of the Apollo spacecraft which includes the Command Module and the LEM! This great piece of memorabilia was marketed in 1969, the same year the historic moon landings took place, and at 1/200 scale it would make a beautiful display in one of my many display cases. And at $40, its quite a steal...
I think I may be done. Except something in the auction has caught my eye....How could I pass this up?

Its an Aurora TV and Movie sci-fi model kit lot! Its a four kit combo of classic kits like the Orion Space Shuttle from 2001 A Space Odyssey, the Flying Sub from Voyage to the Bottom of the Sea, the Spindrift Rocket Transport from the thrilling Land of the Giants, and finally the Flying Saucer that appeared in The Invaders.

This is a classic sci-fi modeler's dream. These are circa 1975 kits that are hard to come by, representing a time period in the film industry when the title of the movie described exactly what the movie was all about. With the bid up to $181.50 at the moment, it is a deal hard to resist for a guy willing to spare no expense to fill my shelves with collectible goodness.

Just when you thought I was finished.... 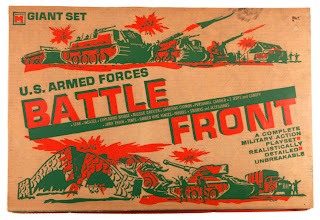 What little boy didn't play with toy soldiers as a kid? I sure did, in fact, I even wrote an article about the ten worst army men that I ever owned. Heck, I still play with soldiers in a way, just slightly more complicated. Any how, this little gem comes with so much cool stuff to fight your own miniature battle. Check it out - a tank, truck, jeeps, an M29 Weasel, an APC, and artillery - all included! Not to mention, you've got about 26 little dudes that come in various fighting poses, and even the tents for them to sleep in! As if that were not enough, for added realism, you get a spring loaded exploding bridge, barbed wire fences to keep the bad guys out, and a spring loaded canon that shoots tiny projectiles!
I can't even contain my enthusiasm for this item! The only odd thing is that the "tank" appears to be a French AMX-13, but hey, still pretty unique.

So, after an afternoon of shopping, I'll call it a day. I'm pleased with my would-be selections. Hake's was nice enough to let us peruse their site and use their photographs for our whimsical shopping spree. They were also nice enough to create a little incentive which will see one lucky blogger, chosen at random, to receive a $100 credit to use in their store. Even if you don't have a blog, you should look at their site and see what you might like. There are a lot of different categories of collectibles that should get anyone feeling a little nostalgic.

Now that I'm finished here, I'm going to go sit on the couch and wish that my son had a Battle Front Playset that I could borrow for the rest of the afternoon.....

Some of you may be wondering what this is all about. Every Monday, an assignment from Cool and Collected is given to participants in the League of Extraordinary Bloggers to write about a given topic for that week. This week's assignment, if you haven't figured it out, is a pretend shopping spree at Hake's online store. This is my response. Once complete, we post our work, and share the work of others.I use this to bridge the gap between modelers and collectors, who are in most cases one and the same. It is a fun way to get my work out there, and to read the creative stylings of other bloggers.
If you like this article, check out some others that are just like it!