League Assignment - The Oscar Goes To...

Your Weekly Dose of Pop Culture and Scale Modeling!

Well, the Oscars have come and gone, and as in years past, I have no idea who won one of the prized statues and who went home disappointed. I'm too busy working on this blog to bother. But the hard work will pay off eventually when I'm famous enough to have the resources to hire some one as edgy and funny as Seth McFarlane to do some guest blogging here. But until that day, you're stuck with my pitiful attempt at humor and simple modeling skills.


This will be a quick project, hopefully not lasting more than a few days, but at the rate my Academy F-16 is progressing, I could be wrong. Never the less, I want to take some time to re-finish a model that has been sitting idle for several years now.
I'm sure all modelers, and well as my collector readers, can agree that they have kits or other items sitting neglected on a shelf, or in a box, tucked away until the right moment presents itself to take up its rightful place on display. Such as it is, I have A LOT of kits in a half finished state, waiting for my return. Well, this week's League topic has presented the perfect opportunity to resume a long forgotten model...A Ki-43-i Hayabusa, better known as the "Oscar".

Japanese for "peregrine falcon", the Hayabusa was a single engine fighter used by the Imperial Japanese  Army Air Force during World War II. To ease identification of Japanese aircraft, Allied forces gave the Ki-43 the reporting name "Oscar". Nakajima would begin building the first production version, the Ki-43-i, in 1941. This type had a top speed of 308 MPH and wielded two machine guns mounted in the engine cowling. With it's great maneuverability and climb rate, the Oscar would prove deadly with these guns, responsible for shooting down more Allied air assets than any other Japanese aircraft. Nearly all of the Japanese Army Air Force's aces would achieve their status piloting a Hayabusa. 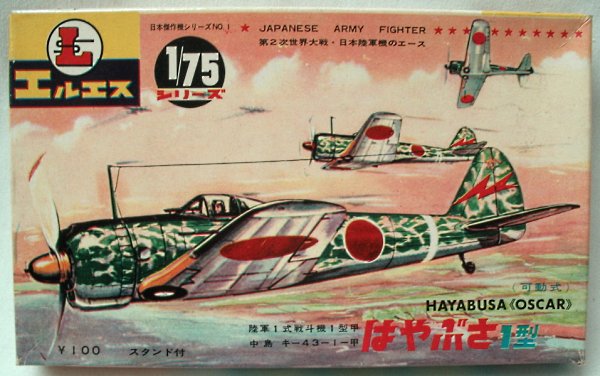 My model is a vintage LS kit that I picked up for about $2.00 at a model show. It is an odd scale for today's standards, at 1/75, but contains a decent amount of detail, and moving parts - the control surfaces, and landing gear can be configured in different positions. It is difficult to find these kits any more, and sometimes I wonder if I should have put it together at all... 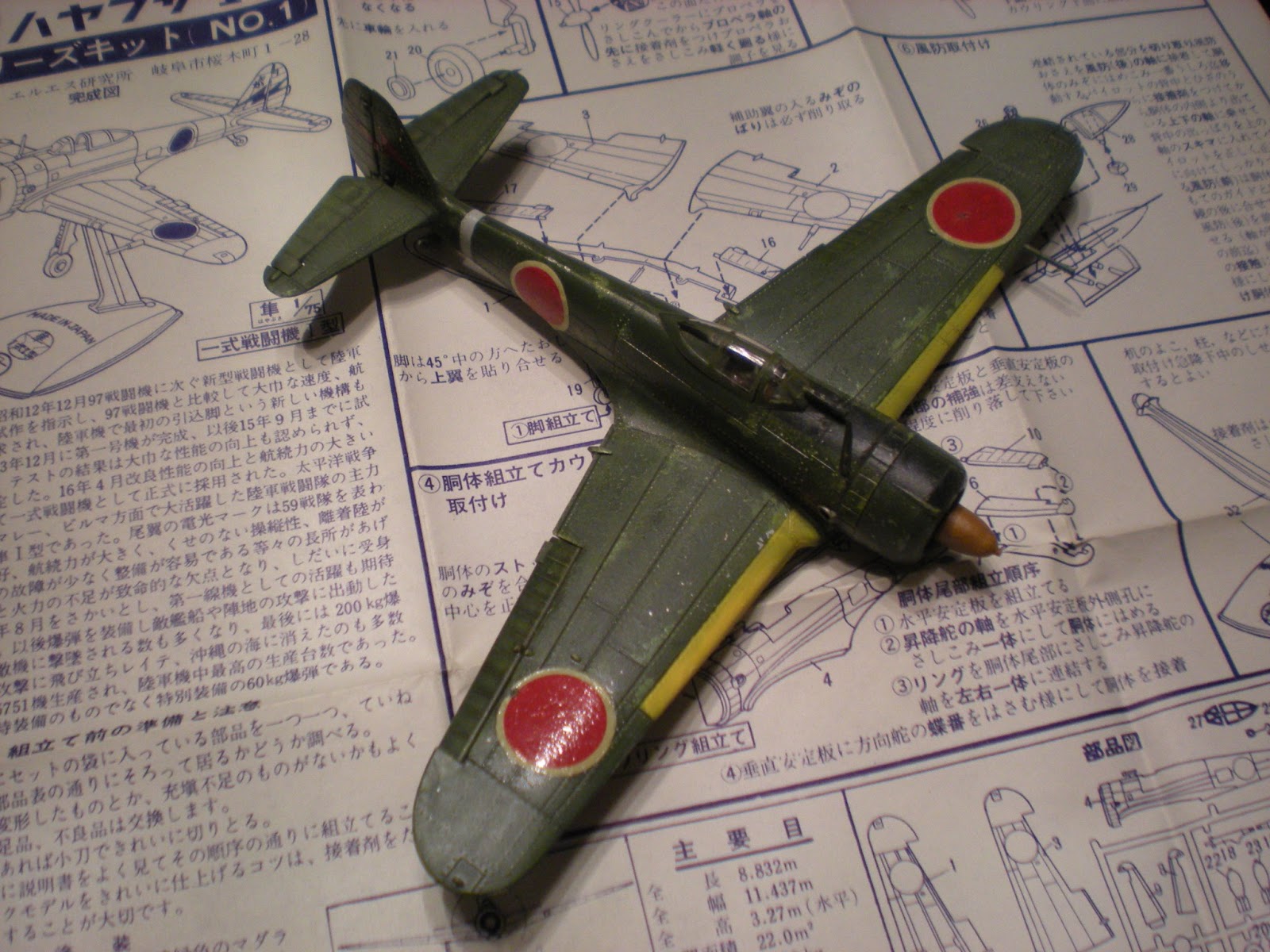 I put the whole thing together shortly after having bought it, about five years ago, if not more. Then why has it been sitting, unceremoniously neglected for so long? Let me explain.
I had been attempting a new technique for pre-shading panel lines using a black Sharpie. It seemed to work well at first, and the initial base coat covered the permanent ink just fine. However, when I sprayed the clear coat over the model, the particular chemical reaction brought the Sharpie to the forefront, making it appear as though I'd drawn all over a finished model! Rather discouraged, I left it like that...until now. 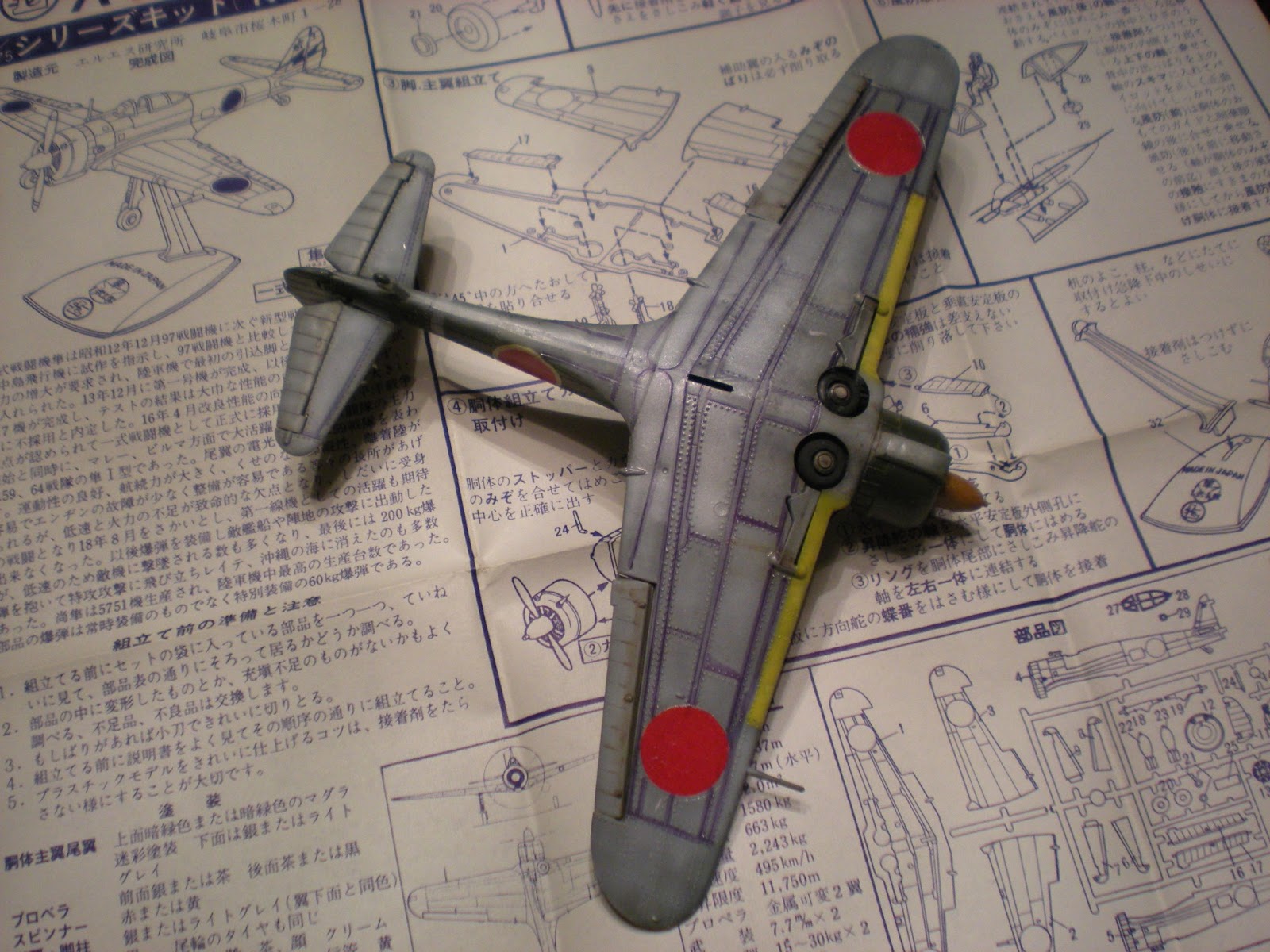 My intention initially had been to model it in flight, and I intend to follow through on that. As you can see, I removed the propeller blades in an effort to replicate a fairly invisible spinning prop. The landing gear are also glued up in place.
That being said, I'll not only be correcting the horrendous paint job (largely effecting the undercarriage as you see to the left) but I'll be placing it in flight using a small jar lid base as I've done recently with other projects.

Some of you may be wondering what this is all about. Every Monday, an assignment from Cool and Collected is given to participants in the League of Extraordinary Bloggers to write about a given topic for that week. This week's assignment, if you haven't figured it out, is The Oscars. The one-word assignment is open for interpretation, and this is mine. Once complete, we post our work, and share the work of others.
I use this to bridge the gap between modelers and collectors, who are in most cases one and the same. It is a fun way to get my work out there, and to read the creative stylings of other bloggers.
If you'd like to read some of them, check them out: