The Top 10 Worst Plastic Army Men of All Time

I was inspired by the post I made Friday to expand a little bit on my childhood passion for those ubiquitous little green army men. I remember having tons of them, of all different colors, sizes, and poses and I could spend hours setting them all up and then spend hours knocking them all down in mock combat. 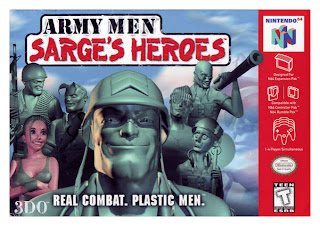 I've always been passionate about army men. In grade school, while other children fawned over Woody and Buzz, my favorite characters in Disney-Pixar's Toy Story were the true heroes...the army men. In high school, I avoided doing homework by playing Sarge's Heroes on my N64.

I know, I know...you're probably thinking what does any of this have to do with scale modeling? Well, though not directly related to scale modeling, I believe that army men played a role in developing my passion for military modeling and dioramas. I would bet that most modelers, especially those in the United States would say the same. After all, to some degree, aren't we modelers still enjoying plastic army men? They are just a bit more complex now.

Any way, in my eyes not all army men are created equal. Some performed at a higher level than others. And some were quite simply not fit for combat. I have made a list of those plastic soldiers who did not make the honor roll...

The reason he is not higher on this list is due to the fact that he is actually some what useful. As my tactics in army men warfare progressed, both sides began using mines to an effective degree. This did eventually make the mine sweeper and the rest of his EOD buddies necessary. But the fact that he is a character that looks more like a curling champion than a soldier, he was generally left in the toy box...

I understand that war involves a lot of travel, especially by foot. Being in the military I've done enough marching myself to know that it sucks. It isn't fun. Nor is it fun to play with a soldier that is marching. There is a war going on! You can't just show up all nonchalant. I want to see some motivation!! 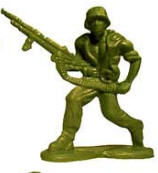 I like the motivation here. He looks heroic, with his bare chest out, sleeves rolled up, and an M-60 with a belt full of rounds to blow...which for some reason he is attempting to wrap around his waist...He wins points for machismo, but unless he is just going to scare the enemy by firing bullets over their heads, he is fit more for a Hollywood movie poster than any back yard battlefield...

I never understood this guy. Sort of a multitasker with poor muzzle discipline. Put him in a combat zone and he was never as effective as he could be. It is hard to squeeze off accurate one-handed automatic fire while ordering a pizza...Put the cell phone down and get to work!

Then there is this guy. At first glance he looks legit - in motion, rifle at the ready, finger on the trigger. Then when the shooting starts its OH LOOK! A SQUIRREL!

If you ever needed to know where something was, this guy always knew it. Perhaps you need directions. Just ask him. Do you want to know where the enemy bunker is? He'll tell you. He had all the answers to all the logistical questions. Though he can't shoot a gun, he could tell you where to find one...

It was kind of tough not making this guy the number one pick. We are in the middle of a war and here this guy is waving to the bloke looking back at him through a pair of binoculars. Can't shoot back, but he can give you a mean high five!

As courageous as this guy would have to be to resort to hand-to-hand fighting, he never served that purpose. Often times he became the unlucky prisoner, holding his weapon over his head in surrender. I also found that if you laid him prone he made a good wounded guy. 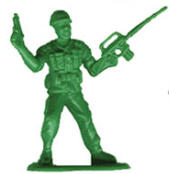 What. Is. He. Doing?
Perhaps he is celebrating a recent victory? Perhaps he is peddling fire arms on the black market? Would you like this 9mm, or this impressive M-16? Maybe he is asking #5 which gun he would like to buy...

And the award for worst army man of all time goes to... 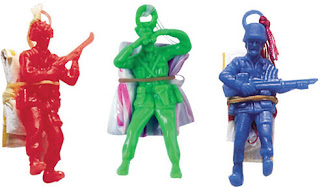 Oh man, this one is hard to argue. Not only did they come in all the stupid, useless posses detailed above, they came attached to parachutes that they had to drag around the battlefield. They were never as cool as I always imagined they would be, considering my house never had the elevation sufficient enough to deploy the parachute allowing them to descend slowly into combat. More gimmicky than effective, they often got tangled up in their lines, resulting in them ending up as the worst army men of all time.

Hope you enjoyed that little detour from scale modeling! Let me know what you think about army men, or if you have others you would add to the list!
Thoughts