Cool and Collected, a blog about feeding our obsession with collecting toys, action figures, comic books, and the like, has been running a weekly effort to help boost inter-bloggersphere relationships and readership. Each week, an assignment is posted, and each week participants must blog about that topic.
This is the first time I have joined in the fun. 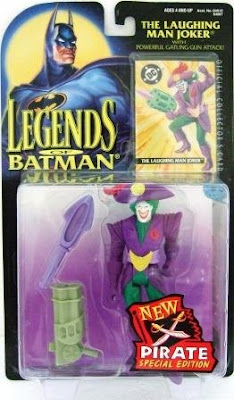 Most people will likely say that scale modeling and collecting, indeed action figure collecting, are completely different subjects. Well, that all depends on what you do with the action figure after you've collected it, I would say. Never the less, I am a modeler at heart and most modelers will agree that they have some sort of collection of plastic kits that we so humorously refer to as a "stash". Mine is modest but growing, and is complimented by a growing collection of action figures.
The relationship between modeling and action figures ties together when you see how one can use those large scale figures to create some pretty neat custom dioramas or vignettes. You see, I don't purchase action figures to have them collect dust on a shelf some where. I use them as the characters in a scene I create. Since action figures have such a wide range of subjects, the possibilities are limited only to my imagination. Though my creations may agitate the staunchest of collectors for ruining a perfectly good figure, I find action figures to be another medium for my artistic expression through modeling.


This week's assignment from the Leauge of Extraordinary Bloggers is "Pirates"...

My very first action figure vignette used a pirate figure that I found half buried in my back yard when I moved into my new home three years ago. It was a special edition Pirate Joker figure from the Legends of Batman series. After rescuing him from the dirt, I gave him a proper wash in the sink and pondered over what to do with him. His unique outfit inspired me to try something new. Until that point, I had never had the notion to build a scene using such a figure.

I set out to make this pirate look as realistic as possible, incorporating some of my modeling skills in the process. A simple repaint wasn't enough, as I felt it necessary to fill the joints and seams to give him less of a toy like appearance. 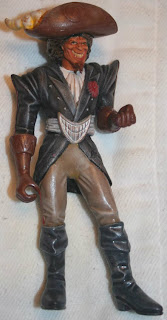 Once satisfied, I gave him a complexion more worthy of a sun-beaten scallywag, and the clothes to match. 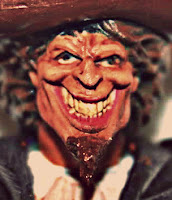 And the face only a mother could love.... 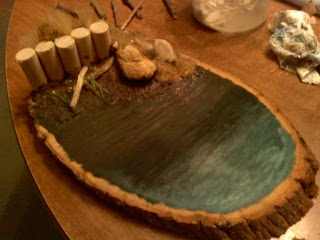 Being satisfied with his new look, I moved on to the base. The idea of the scene transformed and changed multiple times before resting on the final idea. I purchased all the materials needed from Michael's Arts and Crafts and set out to make a peaceful seaside environment for my new pirate. Some wooden dowels, balsa wood planks, and a some paint create the dock and bulkhead... 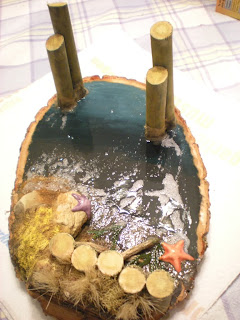 ...while Realistic Water Effects by Woodland Scenics replicated the ocean at low tide, complimented by some starfish made from Milliput. 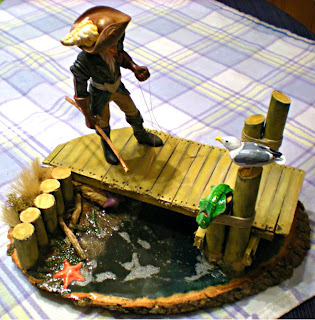 So the transformation from action figure to vignette is complete.
The final scene: the pirate has caught a nice fish but his booty may soon be plundered by a marauding sea gull. Who will get the bounty?

I'll admit, the scene was very simple but for a first time piece it isn't bad. I'm still refining my skills working with action figures as they are a bit different than your standard plastic model figures. They require a bit more time and patience to work with.
So now you've seen a bit of my work, and you can see how modeling and action figures can come together to create a fun project.
It was a pirate who inspired my first action figure diorama, and it was pirates that inspired my first League Assignment. I hope you enjoyed reading this, and whether or not you are a traditional modeler, or just some one who appreciates action figures, I hope you will stay tuned for the next creation from the Workshop!
Thanks!
Check out these other pirate themed blog entries from around the League!