Yoda in the Hood 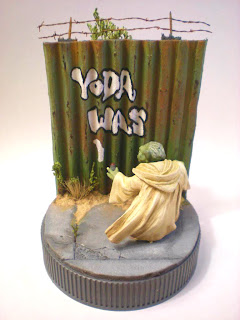 What I've done here is clearly tongue-in-cheek and I'm sure there are many a Star Wars loyalist that would be up in arms about it. However, I'm hoping you have at least a small sense of humor, or at least an appreciation for the unique.
I wanted to re-imagine the experience of Yoda as he escapes the fall of the Republic and retreats into exile. The movies do not cover Yoda's life between Episode III and when we are reunited with the Jedi Master in Empire Strikes Back. In fact, I did not even know what was written about that time period in Yoda's experience until reading about him on Wookiepedia the other day.
In the version depicted here, after being forced to leave Coruscant, Yoda attempts to hide out on a remote planet in the Outer Rim territories known as Earth - a backward planet no one would ever think to look. There he took up residence in the back streets of a bustling urban center, volunteering at a soup kitchen while schooling disadvantaged youth in the evils of the Empire and galactic gentrification or some such. When the bounty on his head grew larger, it wasn't long before the Empire realized his whereabouts. Prior to fleeing to the comparably unbearable mud hole that is Dagobah, Yoda would leave his mark. Here I have caught him in the act...

For as simple as it is, I quite enjoyed this. Much of what you see here, with the exception of the little Jedi, is made of material you can find in your house - cardboard, foam core, a jar lid, wire, to name a few. I hope you enjoy it! 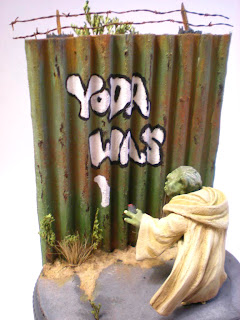 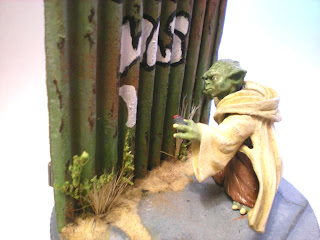 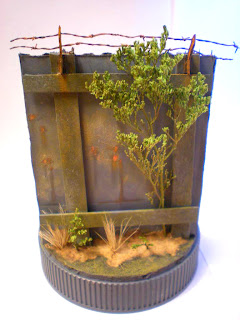